So, I don’t have anything too specific to write about right now. I guess that’s what’s called writer’s block. Probably because I’ve been super stressed about stuff going on in real life – and I don’t like feelings, so I won’t get into that. (I guess this blogging/running is not real life….??? I don’t know why I said that. lol) Anyway, this is just random stuff about running from this week. 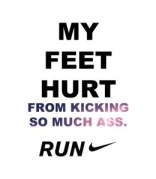 First off, I feel even more like an actual runner. There’s been a lot of posts and tweets starting off with the phrase “you know you’re a runner if…” and you fill in the blank. Well, I read one the other day that was “you know you’re a runner if…you don’t know your toe is bleeding until you take off your shoes and socks.” I actually experienced this for the first time. And, I laughed! My socks had a big blood stain, and I laughed. Its so gross, but I laughed. Don’t worry, nothing major…I still have all my toe nails attached. In fact, one was digging into the side of another toe, and I have a nice small puncture wound. I think this officially makes me a real runner. Anyway….

I finally went to my doctor for my hip. Well, a new doctor. I hate picking new doctors, but I had to with renewed insurance and not living near my old doc.  I had a general physical done and told him about my running woes. Of course, my hip isn’t hurting at the moment, nor has it hurt in about a week….I felt like a car: they never make the noise you’re hearing when you take it to the mechanic. I also wanted him to check out an old injury from a sprained ankle I got last october (I sprained my ankle playing soccer – my own teammate kicked a ball really hard into my ankle – and even though it doesn’t hurt when I run or anything, it is still more stiff than normal and does hurt when I sit on it funny like in yoga or something). 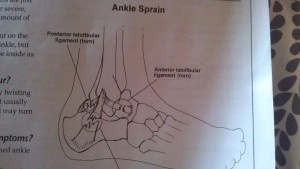 That ligament – the circled one

As far as my hip goes, he said I have normal range of motion and to keep an eye on it…basically to contact him when “my car starts making the noise again.” My ankle though, he did say it is more stiff than the other one and told me that I probably injured/tore my anterior talofibular ligament (don’t worry I included a picture) which is the most common injury with sprains. He gave me some exercises to make it stronger and I stopped by physical therapy to pick up some resistance bands. Even though it has been a while since the actual injury, he still said it is repairable and I can make it stronger and thus – not hurt. So, we’ll see how all that goes.

Since I don’t have a race this weekend, I’ve just been taking it easy on running. I took monday off, but ran tuesday, weds, thurs and will run today. I actually woke up feeling shitty yesterday morning and wasn’t going to run, but as the day went on I felt better and my running shoes were mocking me so decided to lace them up and run. My runs have felt great all week, but it is getting hot outside mid afternoon; I might have to start setting my alarm to run earlier in the day even if I do get off work late.

On a side note, I picked up two running books at the store. One is the the “Runner’s World Complete Book of Women’s Running” (I love the magazine – I subscribe – and always get good advice from it, so I figured the book would be good). I mostly got it to see what they recommend specifically for women and because there are some training programs in there…..I *think* I’m going to start training for a full marathon!!! I’m still debating, and it seriously scares the shit out of me to start it. Mostly because  I hurt after running a half..how in the world can I double the milage!?! Plus, right now I have the time to train, but what if I get a new job? Will I still be able to get in all the needed runs?? So it’s not set in stone yet, and I need a good marathon to set as my goal. Since I want to do a Rock and Roll series marathon, one of those might be my goal – either the Colorado one (late september) or to cross off Nevada from my list: the Strip at night (Early December)!!! Let me know any tips for training for a FULL marathon….any and all would be greatly appreciated.

I also got “50/50 – Secretes I learned from Running” by Dean Karnazes. He pretty much inspires me…he DID do all 50 states, in 50 days, and all full marathons! I’ve already started it (I’m only one chapter in) so I’ll let you know how good it is! But don’t look for my review too soon….I’m reading about 5 books at once. No joke.

Lastly, my Mom told me that Albuquerque, NM is actually HIGHER than Denver and is about the same elevation as Boulder, CO…so my PR is super awesome, and makes me ready/motivated to kick even more ass at the Bolder Boulder end of this month!!!

Ok ok, even more lastly: I got an email yesterday from the Horsetooth Half about official race photos. I’m actually probably going to purchase one because I think I look er …fuck it: BAD ASS! Here’s the proof from online: 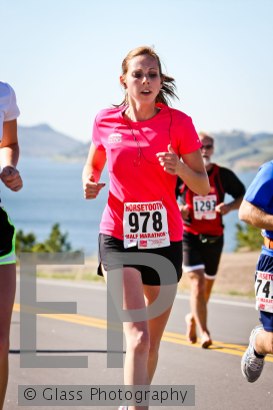 Hope everyones’ weeks went well! Does anyone have any races this weekend??? If so, GOOD LUCK!

Tiny Town with my Tiny buddy! He had so much fun! The Choo Choo was his favorite part! #familytime #familyadventures #explorecolorado
Now that I'm running again, I'm looking for races to run! First up, I'll be doing the virtual DC Wonder Woman race presented by Echelon @dcwonderwomanrun ! Want to join me? #WonderWomanRun #bibravepro #bibchat
First few weeks of the 2021 cross country season down!🏃‍♀️ Sunrise runs, trail miles, times trials, and our first meet. 🌄 I love this part of the season as goals are made, summer turns into fall, and everything falls into place. #coaches life #crosscountry #xc #justrunning
I'll just leave this right here for you... #rainbows #goldenco #visitgoldenco #coloradolife @visitgoldenco
Good morning from the start line of the Holy Cow Stampede. After a rough morning getting here, this sunrise makes up for it! #sunriselover #workingmom #morningmotivation
Returning to running...again. After 4+ months of not running due to some health/medical issues followed by a broken toe, I return!
Family fun at the Royal Gorge! #familytime #optoutside #vacation
From sunrise to sunset. Up before the sun and back home well after it. #racedirector #familytime #4thofjuly #fireworks
I'm not crying....you're crying! My jumper takes 6th place in the Colorado State Triple Jumper today! 🥲 with 3 PRs today! Final PR of over a foot! 35'2" #proudcoach #coacheslife #triplejump