Continued from yesterday….If you missed the first installment of My First Marathon Series, you can read it HERE.

I don’t think I slept much, I never do before races. I was even up before my alarm went off. If only I could do that for work! Looking out the window, I realized it was STILL raining! What’s a Colorado girl to do!? I had no idea how to dress for a rainy day, let alone a rainy RACE! Ok, that’s a little exaggerated. I wasn’t worried about the cold, I could stand that, and frankly it wasn’t that cold, temperature wise. I was worried about the wetness, my shoes and socks being soaked and getting blisters in addition to regular chaffing from moisture. I ended up in nylon shorts, my omni heat long-sleeved shirt under a race shirt and my normal socks and shoes. I added a cheapo rain coat I had bought at a Good Will earlier in the week thinking I would need it on a boat ride in Maine. I ended up wearing that for a majority of the race and then tossed it in the trash when I was done with it since it was super cheap.

I loaded some bags into my car. On my way back into the hotel to grab the rest of my stuff, I grabbed a cup of the hotel’s coffee. (That’s all they offered us. 80 bucks a night, and we get foldier’s coffee. I’ve stayed in cheaper places that had a full supply of breakfast foods! Can you tell that I did not like my choice of hotel) But, hey, I can’t run a race without my cup of coffee!

Anyhow, I drove to the race start. The start and finish were super close, so I parked in that area. I would have taken the shuttle if my hotel would have let me check out late, but no way was I paying for an extra day! I stayed warm and dry in my car for as long as possible while I put together my bag for the drop filled with what I would want immediately after the race. Finally, I was brave enough to get out of the car to face the cold and the rain as well as the CROWD! I knew it would be overwhelming again. And it was. Everyone seemed so superior to me! I know it’s all in my head, there were plenty of first timers there in addition to me, but still! I was just gawking at people, walking around aimlessly.

Caught on camera! I found this on the facebook page. That’s me in the pink….looking like a little kid!

I huddled under the only covered area to stay as dry as possible before the race and then dropped off my bag and then carefully walked through the wet grass to the starting line. I waited there and chatted with “Paul,” a random local running the first leg of the marathon relay race. We talked about how similar Denver people and Burlington people were, and I was tending to agree: the atmohphere of the two areas were very like-minded. He told me he loved the event and wished my luck on my first marathon!

Then, after a moment of silence for Boston and the national anthem, we were off. My thought was, “well, here we go, there’s no turning around now.”

I tried to remember my friend’s advice: “Mind over matter…mind over matter” and the advise and Good Lucks from my fellow bloggers on twitter!

And….it actually wasn’t that bad! Well, it was hard, and it was painful. But OVERALL, less scary and less hard than I thought it would be.

So, it rained almost the entire race. The sun peaked for literally 5 minutes on two separate occasions. I felt really good for the first half. Minor hip and knee pain that would come and go and switch between joints, but it was stand-able. I tried to just zone out for most of the race and concentrate on anything but the pain and the remaining miles. I watched the runners around me and watched the crowds cheering us on from the side. I sung along to my music and thought about my nutrition…. well, really thought just about ANYTHING other than running.

The race course was set up as a series of different length loops that all met back in the middle. This made it very easy to track your progress and there was constant crowds to cheer you on. I liked it a lot!

The first loop: miles 1 -3 – I was getting a feel for running in the rain while running through a historic part of town. Nothing too eventful happened during this loop.

The Second Loop: miles 3-9 – A nice down and back along side a river. Just before the turnaround point, a group of drummers to entertain the runners. You could hear them a half a mile in each direction. A great beat to keep pace to and keep your feet moving. Also along this loop, there was a spot where the fence ended and there was a steep drop off down a hill. Well apparently this was the most ideal place to….urinate! Indeed, a whole line of men, backs turned toward the other racers, peeing off the side of the drop off. I shook my head and literally laughed out loud (slightly jealous that I didn’t have that convenience). Realizing that this was the “pee” zone, I thought about my nutirion and hydration. Sure enough, I had to pee too! Running for 26.2 miles sure does entail a lot of other eliments…like bladder functions, that I never really thought about! I, however, waited for the porta-potty row farther down the loop. 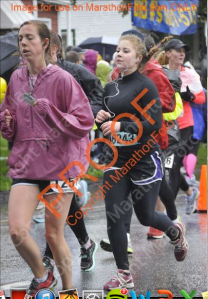 ugh, i look exhausted already! Miserable in the rain!

The Third loop: miles 9- 15 – This was the “hilliest” part of the course…maybe for most. The “biggest” hill awaited at the end of this loop. Another out and back; this loop offered a tour of the residential parts of town and view of the lovely Lake Champlaine. Clearly, this was the point where I passed the half way mark. Only having competed in half marathons, passing the 2 person exchange and half marathon finish was an interesting feeling. I still had 13.1 miles left to go. The end of this loop was the trickiest part of the course…leading into the next loop……

The fourth loop: miles 15 – 26.2: The start of this loop was THE hill. The only real hill. The hill that everyone was freaking out about. I heard chatter about it in the staging area, lining up before race start. And I heard talk about it as we came closer to it on the course. I wasn’t worried about it pre-race. I looked at the course profile and didn’t notice any significant hills. But the more I heard people freak out about it in the race, I started to get worried. I came around the bend at mile 15.

There is was, the hill…….REALLY? That’s what you all were worried about….Come with me to Colorado, I’ll show you a hill!

Needless to say, I charged up that hill! I remember looking over to the left side, right before starting the climb. I locked eyes with some random, energetic, crazy redhead. He instantly started cheering me on! “Go get it! You got it! Do it!!!! This is hill is yours!!”  in a fake deep, drill sergeant voice. I let out a laugh and with a huge smile I ran up that hill!!! Great crowd! 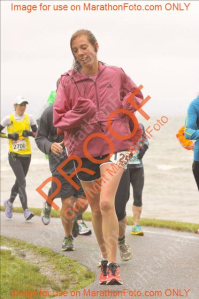 The rest of this loop wound through neighbors hoods filled with people supporting the racers from their houses. In addition to the race aid stations, these lovely citizens set up their own water and fruit aid stations. They had music playing for us and crazy men waving giant american flags (this was the day before memorial day).

We passed through an aid station (I have no idea what mile) where the sun decided to peak it’s head out. I even commented on it to a race volunteer and decided, even if it starts raining again, I think it was time to ditch the rain coat. I wouldn’t have much farther and I wanted the lesser weight.

We rounded the corned at mile 22, and followed the shore of the lake again.

Look at that hair!! WOW!

The Last 3 or 4 miles: As we came to mile 24, I was finally passed up by the 4:00 pace group. Can you believe that!? I was ahead of them a majority of the time. But, at last, this is when I really started struggling. Picking up each foot became a chore and planting them down began to hurt with each step. I was really struggling. I was on the verge of tears. I was so painful that I didn’t even want to reach around into my fuel belt and dig out another energy chew, maybe I should have. I was then passed up by the 4:30 pace group. But I wasn’t admitting defeat! No! I kept running, walking on and off.

Sometimes I still think how I, and others, do it. I remember being in so much pain. My hips, both of them, were extremely tight and painful. My knees were throbbing. My ankles hurt and my arches felt like they were going to explode. ALTHOUGH, my energy felt great! For real, my heart, lungs, etc felt fine! If it weren’t for the pain and tightness, I could have ran for forever.

Knowing I didn’t have much farther to go, I just kept talking to myself. “you got this.” “Just keep running.” “You’re almost there.” “For real, we have to get to our car some how, you might as well just finish the race!” (Apparently there’s more than one “me” in my head at times).

In the zone! BAM!

At one point along the course, as the crowd got thicker, and a bystand saw the look in my face, she read my name off my bib and shouted, “You got this WHITNEY! You’re soooo close!” That really did help me make it to the end.

The crowd kept growing thicker and thicker and I knew I was almost there. I ran the remaining mile. Those portable, metal fences started boarding the course…OH…..soooooo close!!

I concentrated on not falling on the rain soaked, muddy grass and my eyes saw the finish line.

I ignored my pains and cranked my legs into full gear. I was going to finish this strong!

I crossed over the line, threw my hands in the air and plastered a huge grin on my face.

I ran my first marathon!

9 thoughts on “My First Marathon, Part II: The Run”