Since my last update post, I have started to fall back in love with running. And you know it’s serious because I don’t use that L word very often!

There’s definitely one moment, one event, that I can pinpoint that this love has returned.

A couple of weeks ago, as part of my 3W Ambassadorship (is that a word?), I went to join a local running club and promote 3W and the upcoming events.

It was a typical Colorado winter day and the high that day was about 0 degrees. Realizing that it would be a lot colder when the running group meets, I thought through my sanity as I contemplated running with them.

I figured if I was promoting a racing company I better get my butt outside and run with them!

It was at the Boulder Running Company (the actually Boulder location) and the drive up there from my house was slow and steady due to the ice on the road.

Was I really considering running with them??

I arrived, said hello to the BRC employees and event coordinators, set up my booth and kept debating whether I should actually run.

The only thing that was holding me back was my outfit – or lack of appropriate COLD weather running clothes. Not that I wasn’t wearing warm clothes…just not the ideal running-warm weather clothes. If that makes sense.

Everyone else around me had all the latest gear and technology. I just had multiple layers of workout clothes and a hat with a hole in it (for my pony tail). However, somewhere in between loading and unloading my car, I lost that hat (don’t worry, I found it weeks later)! I found another one in my car….so I decided to just go with that one, although, this hat didn’t have the convenient pony-tail hole. What’s a girl to do!?

I zipped up my omni-heat jacket (the liner from my snowboarding jacket) over about two to three other layers, placed the too loose hat on my head over the pony tail and hit the pavement!

Now, normally this running groups gets over 100 people! With the weather being about -8 when we ran (no joke), there was only 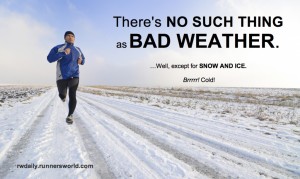 about 30 people – but still!! 30 people still showed up to run in negative temperatures!

With this run club, they have a 5 mile loop and a 3 mile loop. I wanted to go for the 3 mile loop since I’m still getting back into running after my knee pain, but literally EVERYONE went for the 5 mile loop!

Never having run with them, I don’t know Boulder well enough and didn’t know either of the loops or where I was supposed to turn for the 3 miles. I didn’t even have a headlamp, and I was running at night! I kept running with people (people who came up behind me because everyone else was so fast), and asking them where I go! No one seemed to want to do the 3 mile loop and no one seemed to be able to tell me where I needed to go! Was everyone in Boulder that badass that they never did the smaller loop!?

Luckily, a very nice guy ran with me (he had a headlamp) and we talked to take my mind off the run. He was actually pretty interesting – he worked for shoe company, got run coach certified and now does corporate run group training. Gave me lots of good ideas! Anyway, he wanted to run the 5 mile loop but he went off the normal course to make sure I was on the right path for when I needed to turn off and then he veered back to the 5 mile loop to get more miles in. I was so thankful for him!

I made it back to the Boulder Running Company from my 3 mile loop just as the first people were making it back from the 5 mile loop!

Even though I didn’t have the right hat (the one I chose kept slipping up my head, exposing my ears, due to my pony-tail and I finally had to take my hair tie out and fit my hat over my ears better) and I seriously got mild frost bite on one ear (no lie), and even though I didn’t have latest cool running clothes, it wasn’t that bad.

And ironically it wasn’t that icy; the plows left crumbly snow all on the side walks for traction…

And after the first half mile, you warm up, you start to feel your toes again, and your body gets to equilibrium where the cold air no longer burns when it comes in your mouth or nose…..

Ok ok, when you write it all out..it sounds miserable. But it really wasn’t THAT bad. I swear!

Besides, when you run in that kind of weather, the sweat and cold air combination gives you super sweet snowflake mascara!

As I was standing there, in the nice warm building, I looked around while eating my free pizza and drinking my free Avery Beer and thought, “Now these are my kinda of people. We all might be a little nuts and have a different idea of fun than most. And even though some people might want to commit us to an insane asylum, these people are my kind of crazy.”

And boom. I fell back in love with running.

-Running without my phone, i.e. “run tracking device.” A) I don’t get interrupted with my boss’s 20 million texts or calls and B) It’s been pretty liberating to run with out my pace barking at me and just running to well, run!

-That’s not to say I don’t have current goals. Not at all. My goals have been building my base back up and to be running knee-pain free. So far, so good! I’ve been at it slowly. For most of January, I was literally running only 3 days per week…to allow myself PLENTY of time to recover and rest. Then, starting in the beginning of February, I increased the amount of DAYS per week I was running. Now, I’m building my base and increasing the mileage. I’m trying to run 4-5 days per week with this pattern, in this order: short run (3ish miles), medium run (4-5 miles), short run again, then Long Run (6+ miles) with rest days in between. This will be the first full week of doing that! 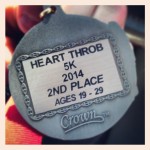 -Also, getting 2nd in my age group a couple of weekends ago definitely aided in my falling back in love with running. 🙂

-Who knows what else it is…maybe it’s the month of February and Valentines day….gross…I can’t even finish that sentence…I actually really despise valentines day…

Anyway, it’s been really exciting to get back into running again…and you know what that means…more frequent blog posts! You know you love it!

I’m in the process of searching for races, planning my training and racing schedule and picking my next marathon to train for..there’s a lot in the running, no pun intended! I can’t wait to get back at it!

Your Turn: What moments made you “fall in love” with running? If you “broke up with running” like me, how did you get back at it?? Tell me in the comments! I’d love to hear from you!

My Friend sent me this video after he found out I ran in negative temperature weather:

5 thoughts on “Falling BACK in Love With Running, Again”