Hopefully you all caught my Erin Go Braugh Post Race Recap! If not, go read it.

A lot has been going on in Racing the State’s world. It’s been busy, busy, busy! If you need a refresher, here’s my last set of life’s updates and my post on running updates.

Let’s just get at it:

Last you heard I was job searching like crazy and picking up random odd jobs here and there. I had a few hours with the Camp MissFits job I do. Well, now pretty much all my hours from there were cut. BUT I wasn’t fired, per say. It’s a long story. I’ll try to make it short and understandable while trying to be professional and respectful.

Let’s see, how do I say this? Basically the business was losing revenue and my boss needed to save money. So, she had to cut everyone’s’ hours and coach all the boot camps herself. ALL of my boot camp hours were cut but the two other coaches got to keep one or two sessions. Given, they’ve been with the company longer…but they also have other jobs that supply the majority of their income.

That being said, she did want/need me to do the tedious, boring, confusing administrative work I’ve been doing..becuase that’s where she needs the most help, apparently. However, most of that involved paperwork, which requires picking up the actual papers and it’s not worth my time to drive and just grab a few papers for one hour of work. So basically, I don’t do very much admin work anymore either.

She did drop a line that IF I was available during tues/thurs nights (which I’m not because of another job I got), I would have been able to keep one boot camp session. Take from that what you will.

To say that I’m disappointed would be an understatement. I helped develop the small group personal training program that she took from me. I worked really hard on training myself and being a better boot camp instructor, but she took that from me. But above all, she had asked me back last year to literally drop my own business and not have a bunch of part jobs (a common thing in the fitness industry especially for newbies) to work more with her and with the promise of getting more and more hours. And now, I’m exactly where she promised me I wouldn’t be: with a handful of part-time jobs.

I still am partially employed by her and will answer emails and help as needed if I can which just means I do a random boot camp here and there and a little bit of admin work that only involves our data entry websites. She did say as soon as she can (who knows how long that will be), she would like to have me, and the other coaches, coach boot camps again, but understands if I wont be able to in the future from filling up my schedule with other jobs. Sounds like a bad breakup, eh? They always realize what they had after it’s gone.

Now, just because I do have a handful of part time jobs, doesn’t mean that’s bad for me right now.

I do have some great news to tell you! I basically have three other jobs I work regularly (along with random gigs I pick up here and there for promotional jobs and brand ambassador work).

Job 1: I am the newest Green Mountain High School Assistant Track Coach!! Yep yep!! I am the long and triple jumps coach! And it’s a blast. I realize that track season only goes to May, but this is excellent experience and IT’S PAID! (Where as when I was coaching Cross Country, I was volunteering). I actually don’t have much experience with jumps, but I’m learning and the kids who are jumpers are new, so I’m not destroying anyone’s track and field dreams! In all seriousness, this is the case, I am leaning as I go with the help of the other coaches and one of my jumpers took 2nd in the triple jump last meet!

Job 2: I got hired just last week as a personal trainer at Prestige Fitness! I’m really nervous for this because I don’t have much one-on-one training experience but excited that I get the opportunity to develop as a personal trainer. Plus, my fitness manager used to teach where I went to personal training school. So far, so good! Everyone there is really nice and not your typical gym worker (you know what I’m talking about: The big douche bag, meat heads or the typical stuck up fake girls). Everyone is down to earth and just athletic in general, the clientele is mostly younger and I really like the atmosphere!

Job 3: Working as a fitness instructor for the City of Golden. I’ve been here since the beginning of February. I have 3 classes a week where I get to develop my own boot camp type of class. It’s  a blast!

The best part about theses jobs is they are all really close to each other and I have very minimal travel time if I’m going from one place to the next. Whereas Camp MissFits was really far from everything and when I had to get there during rush hour, I had to add an hour (literally) to travel time.

Working for Bear Naked Granola on top of the ski slope!

Odd jobs: I still do promotional work and brand ambassador work. “What’s that,” you ask? Well, you ever go to a trade show, auto show, or event at, say, your local ski resort? Chances are the people working those sponsor booths are brand ambassadors. It’s part-time, random work but pays very well.  You also get to meet really awesome people (some not so awesome as well) and make some really good connections. It’s a whole world and you really could make a career out of it – but you have to be very regular about searching for your next job. Some people look for big, fun, popular events and travel across the country while others stick to their home towns and work a lot of, maybe, not as fun ones. Recently I spent about a week in Vail, CO working for Bear Naked Granola again for the US Open (a snowboarding competition). It was a blast and the week ended with free concerts in Vail.

Apocalyptic Fitness: This is my own business. My current projects are writing up a business plan and also figuring out what I really want to do with it. I have dreams of maybe opening a running store with a studio for training people. I really wanted to open it right in the middle of Summit County (the mountains) where there’s a lot of traffic and athletes all year round, but I just found out there’s already a specialty running store there. 😦  I have a lot of thinking to do on this and I also want to get more experience training people one-on-one which I will get through Prestige Fitness! 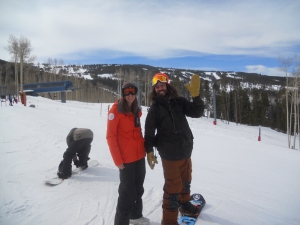 While working I met Danny Davis (an olympic snowboarder) and got to eat lunch in the Athletes Tent with the boy (who was working in there for the same company)!

I think that covers it for career updates.

Since my “falling back in love with running” post, I was still working on building up my base, running about 4 times per week to give my body enough time to recover. It wasn’t until I had to go to Vail that I hadn’t run. After my Erin Go Braugh race, I felt pretty out of shape and way far from where I was last year. I vowed to myself to get back in shape!

I haven’t picked a full marathon yet that I want to try for, but I have picked a half to train for. April 13th, 3W is doing their Prairie Dog Half. It’s the same weekend as the Horsetooth Half, which super bums me out, I LOVE the Horsetooth half, BUT I can get into the Prairie dog half for free and it’s the company I’m an ambassador for anyway. Although now that I look at the calendar, I have a lot of work to do! That’s like less than a month away! I can do it! I think. My body is at it’s best when it’s in half marathon shape.

For now, check out the “Upcoming Races” box on the side as I fill in races!

Now that I am an employee of a gym, I am ready to get back to lifting! Bear in mind, this isn’t what it sounds! Everyone hears the word “lifting” and thinks “BODY BUILDER!” I just want to get my strength back and work on some exercises for injury prevention. I’ll keep you posted with my plans/workouts.

I also started climbing again with a girl I met through the 3W Ambassadors. I really missed it! I’m hoping to go again here real soon!

Other than those things, life is pretty much the same! I’m still seeing “the boy” and I’m trying to hang out with friends as much as possible whenever I get a spare moment. I want to get a few more days of snowboarding in before the season is over! Lastly, over the last couple of weeks, I got to enjoy some live music at a few concerts, which I haven’t gotten to do for a really long time. At the end of the work week in Vail, Capital Cities played and then we hopped over to a Tribe Called Red and Dr. Jazzy Jeff! Then last week, I got to enjoy the musical entertainment of the Kongos, The Unlikely Candidates and New Politics at Keggs and Eggs! All three were awesome! AND they were all FREE!

New Politics rocked the house! Including break dancing on the bar, right in front of us!