(Did you know it’s the Centennial Celebration of the National Parks? It is! The National Parks Service is officially celebrating their 100th birthday on August 25th. I absolutely love and respect the National Park Service and plan on doing a whole bunch of National Park posts this month. Check out my last posts about Rocky Mountain, Arches, Joshua Tree, and Death Valley. Next up is this one, Mt. Rainier National Park….)

Back in April, Ben, myself and a friend of ours, took a journey to Washington. It was a trip to combine many different things: a half marathon for me, my Grandpa’s Memorial service, family time, vacation and some Mt. Rainier fun.

Photo Credit: My Aunt Bambi that lives out in Washington.

Ben and his friend Matt had plans to climb Mt. Rainier. I had no desire (yet) to do this climb, let alone the route they chose, but went with them to the National Park. I was their communication to family and friends via the internet while they climbed. While their climb is their story to tell, this left me with a lot of free time to explore Mt. Rainier National Park, or at least the parts of it that were open in late April.

Ben and Matt started toward the summit from the Paradise parking lot. This is on the South side of the big mountain. During the winter months, a majority of the roads and entrances to Mt. Rainier are closed due to snow. Winter in this area can extend into June, we were told. We were visiting right as lot of the snow was melting, but that still only left one entrance open to get to paradise, through the town of Ashford. 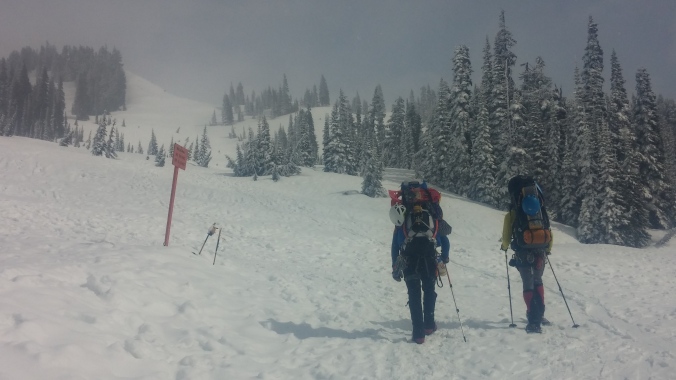 Ben and Matt starting their climb.

After waving good-bye as they started their journey, I doddled, trying to figure out what to do and see. I don’t mind doing stuff by myself, but having company on adventures is always more fun, in my opinion. Not letting being alone stop me, I studied the map for some trails I could explore. Not a lot was open but I had driven past a couple of signs for waterfalls, and thought, “I should start there!”

Leaving Paradise, as I drove down the road, I first came across Narada Falls. At first, when you look over the edge of the parking lot you can see the fast-moving river and the side of a massively wide waterfall. There’s a trail you can take to the view-point down below. I started and was thwarted by a massive wall of snow, waist-high that came right up to the guard rail. I was super bummed as another lone-hiker came. I watched him hop right up on top of the snow and defeat this obstacle (why didn’t I think of that). So, I followed! 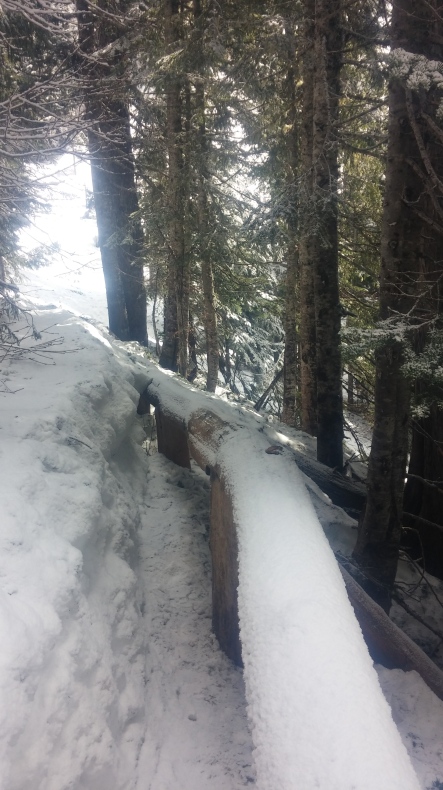 After getting over the snow, I realized that was the only part of the trail that was difficult. The rest was snowed on and a little slippery, but was manageable. The other traveler was in town on business and decided to journey into the park for a quick trip. We helped each other take pictures, then went about our ways. 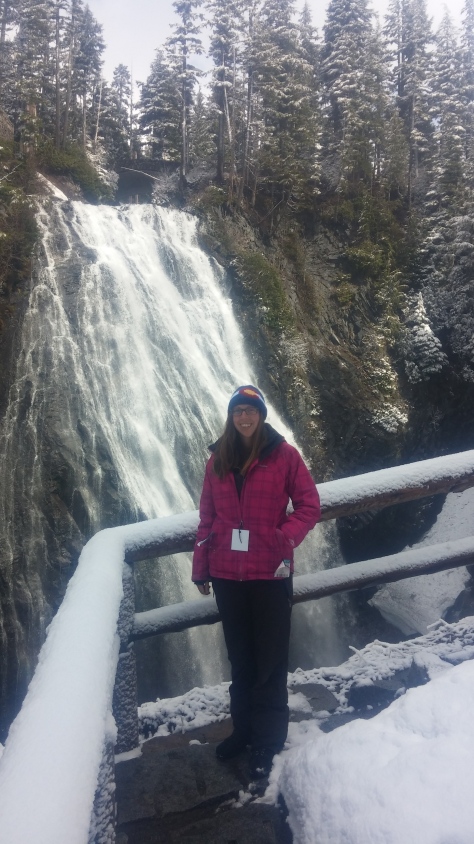 Next up was Christine Falls. Just a quick drive further down the road and I was there. I hopped out of the car and took in the beautiful view. There was a trail that takes you up about the falls, but I was going to save that for the next day.

When traveling by yourself, you take a lot of selfies!

After getting some rest, trying local restaurants (dinner the night before and breakfast), then talking to the rangers, day two brought some more exploring.

I drove back into the park (stopping at every view-point along the way) and did the short, flat historical hike called the “Trail of Shadows”. I learned all about the town of Longmire (a health destination in the late 1800’s for people to cure all that ails them by soaking in the once hot springs and using medicine from the native plants nearby).

View from the trail, through the trees you can see Mt. Rainier.

Then I drove my way up the road again to hike the trail behind Christine Falls with the destination Comet Falls in mind. The ranger did warn me that he didn’t think the trail was passable, but I decided to try it anyway, because I’m like that.

I made it about 1.5, maybe 2 miles at the most, before the trail was blocked by a steep snow slid (see picture). With better shoes and an ice ax or walking pole, I probably would have attempted it. But looking at the bottom of the slope and my trails shoes, I opted to skip it; envisioning myself sledding on my butt to the icy river some 100 ft down. No thank you!

What I would have had to hike over to get to Comet Falls. Would you do it?

The rest of my day was spent at Paradise, staring at the slope, looking for my boyfriend to return, terrified, not knowing they were staying one more night on the mountain due to weather. That’s a whole different story filled with worry, a lot of tears and looking for a hotel at 11pm.

We can’t wait to go back!

Oh, by the way; the boys made it to the summit, safe and sound (and back down again)!

Reposted from @creatingmama2019 Happy Mothers day to all out there in all shapes and form, especially my Mom, Grandma, mom-in-law, and sisters in law! What better day to start posting again on this blog/Instagram.
We're back home safe and sound! Last photo dump from our Alaskan adventure! Layton and I did a dog sled tour and learned all about the idirod! So fun! Definitely a bucket list item checked off!
On one of Ben's easier climbing days, we got to hike and watch the start of the climb! Layton wanted to follow daddy right up the ice. #iceclimbing #adventureswithtoddlers #hiking
Definitely a highlight of the trip! On Ben's day off from climbing we all drove down to Seward for a wildlife boat tour. We saw bald eagles, sea otters, sea lions, seals, dall goat, and dall's porpoises. And the scenery was incredible! #sewardalaska #alaskaadventure #travelphotography
Both Layton and I really enjoyed the @reindeer_farm_ak ! It was so fun! We got to feed and pet reindeer, moose, alpacas and see so much more! I highly recommend this place even if you don't have kids. #funinalaska #travelingwithkids #visitalaska
The cute, little Alaska zoo! #visitalaska #zooexplorer #travelers
Reflection Lake, Alaska. A short little hike with beautiful views. #alaska #hikingadventures #momlife
Traveling with a 2 year is tough...but we made it! Alaska is pretty amazing and beautiful during the winter! #alaska #travelingwithkids #toddlerlife
A little hike with my little one. We made it 1.6 miles without being held! 👏👩‍👦