With all the buzz about the Boston Marathon a couple of weeks ago, and Katrine Switzer running it again, I thought it was about time to publish this post.

It’s probably been about three years since this actually happened, I just never had a chance to write a post. I did have hand-written notes of what I wanted to post in a notebook stuck to a newspaper clipping about this inspiring woman my Grandma had sent me. Then I promptly forgot about it. I still this is a great story to tell.

Indeed, I did meet Kathrine Switzer, the first woman to official register and run in the Boston Marathon. This was before I was a Skirt Sports Ambassador and I had attended one of Skirt Sport’s Ladies Night Out.

The article my Grandma saved for me

I feel pretty privileged to live in Colorado. It’s an outdoor enthusiast’s mecca. It’s perfect for runners and with 300 days of sunshine, a ton of awesome athletic-related companies call Colorado home.

One of those awesome companies is Skirt Sports. A new trend to hit women’s running community is the running skirt (not so new anymore). Skirts Sports is owned and run by Nicole DeBoom. (If you haven’t seen a talk by Nicole, you’re in for a treat. She’s a great speaker, full of energy and a truly inspiring woman with a passion for being healthy, beating your goals, and making other women feel empowered). I have had a lot of exposure to Skirt Sports because they are (were) one of the sponsors for the 3W Ambassador Program (I’m am no longer an ambassador but an employee for 3W Races, a year after this, and Skirt Sports is now a title sponsor of one of our races!). Nicole has come to a lot of our parties/meetings with 3W and her story is awesome. I also have a few friends that work there or are ambassadors (my friends don’t work there anymore and I became an ambassador for Skirt Sports).

About once a month, Skirt Sports hosts a “Ladies Night Out” and has different free clinics, talks, workouts or runs. This week, they featured the amazing Kathrine Switzer.   I hadn’t been to one of these gatherings before, but I made sure to schedule everything around this event as soon as I found out about it. (They still do similar types of events.)

If you don’t know who Katherine Switzer is you need to google her right now (Seriously. I’ll wait. I’m sure most of you probably know who she is).

As you already know (or recently googled) Kathrine Switzer is the first woman to officially, with a bib and everything, run the Boston Marathon. She came to Skirts Sports to tell her story, inspire others and introduce the 261 Fearless Campaign (since this, the 261 Fearless Campaign left Skirt Sports and is with Reebok, I believe. Not a negative thing, just a business move).

First, Nicole Deboom gave a talk and introduced Kathrine’s story. Then it was time for Kathrine to talk. She started with how she started running. Originally, she had told her Dad that she wanted to be a cheerleader as she entered high school. Her father told her that she didn’t want to be a cheerleader because cheerleaders cheer for others. “You want people to cheer you! You can do anything,” Katherine retold her father’s words.

From that moment on, I was entranced. That really struck a chord with me as did most of her speech. After those encouraging words from her father, she started running a mile a day and went out for the field hockey team. It wasn’t until college that she started running longer distances. A friend of hers was training for the Boston Marathon and she decided to do it too. Her male friend swore up and down that women couldn’t do it but Kathrine was motivated and kept up with her friend and the training program.

As Boston got closer, she checked and doubled checked the rules. There was no official rule that women couldn’t enter, so she registered with K.B. Switzer, just like she always signs her name, while aspiring to be a journalist. She stated that she wasn’t trying to hide anything, she just wanted to run.

She lined up on Boston morning with the famous 261 bib pinned to her front. She said the guys around her were super excited she was there, telling her they wished their wives would run with them.

It wasn’t until the first couple of miles those famous pictures were taken. The race director jumped out of the bus and tried to pull her off course. He told her she was disqualified.

Here’s the best part: She just kept running. She knew she needed to finish the race. She needed to finish it for herself and for women’s running as a whole. That night, as she spoke, she said, “I started the race as a girl but finished a Woman.”

My favorite story of the night was about her last long run going into Boston. Her and her friend had just finished 26 miles and she encouraged him to add five more to be sure they had no doubts they were ready. After 31 miles she says to her friend something like, “Man, I feel great, don’t you?!” in which he just fell over and passed out.

She went on to continue to empower women through running.  “Training works,” Kathrine said, and she thinks talent is everywhere; “it’s just that the opportunity isn’t always present. The secret to success is to show up, do the work, have a goal, and if you’re lucky, have a buddy.”

Pretty much on the verge of tears the whole speech, I left feeling motivated, spirit rejuvenated and ready to tackle the world (I need to get that feeling back now). Her speech wasn’t just about running. It wasn’t about feminism or equal rights; I’m sure men would get equally inspired as well. It was about following goals, dreams, and passions. To me, it was about life and going out there to achieve whatever I set my mind to. Recently I have been feeling down about a lot of things: career related, relationships, friendships, and running itself.  I have a new view on all of that now. (I don’t know where I was at this point in time with running, but this was before my current full-time job and I remember just having broken up with a boy around this time as well. I was also having a lot of fallings out with friends as well for some reason).

For one, I know I HAVE to run Boston some day (I still want this so bad). Which means I HAVE to qualify – I don’t want to do the charity route. (While this is admirable and honorable to raise money for a charity, I really want to push myself to get faster and stronger and reach that qualifying time) and now I am super motivated.

Also, when it comes to all those other things, I’m ready to go out and do what I love, I’m ready to do what it takes to do that and I’m 100% devoted to being true to myself. (This did actually change in me. I started being way more assertive of what I wanted in all aspects of life and I fought hard to stick up for them.) A lot of that is personal and may sound convoluted, but the important part is it means something to me (true dat). 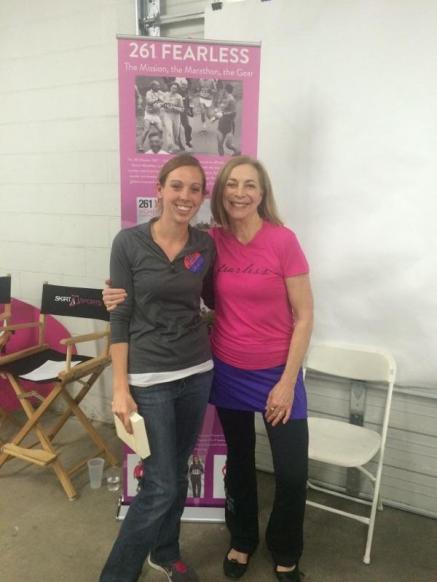 I bought her book that night (and got it signed) and I still have yet to read it. Maybe it’s time to take it off the shelf….

Get the book for yourself:

2 thoughts on “That one time I met Kathrine Switzer”