(Here’s another past due post. I started writing this post shortly after the run and am finally finishing it now. The Horsetooth Half was on April 21st of this year. I wish I had time to write this post sooner than now! I wanted my excitability to show through into this blog! I will try my best to recover my post race enthusiasm…it shouldn’t be hard, this was a great run!!)

I returned to Fort Collins to run the Horsetooth Half Marathon for the third time. This is absolutely, so far, my favorite race. It’s a beautiful course, love the half marathon distance, it’s put on by great people, and it’s challenging! 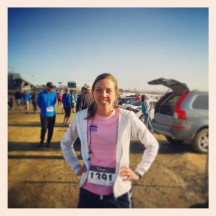 First and foremost, this race is most dear to me because about three years ago this was my FIRST EVER half marathon. I decided to attempt the half marathon distance my last year in college mostly as a way to stay in shape. I didn’t know much about racing, or half marathons in general, I had only previously done 5k’s (not even a 10k!). I bought one of the online training plans from runnerworld.com.

Back then, I was a newbie. I didn’t realize I picked a particularly difficult half. I probably had awful shoes (in fact, I think I was running in Nikes….GASP!), I didn’t know to train hills, and I didn’t have a clue as to what I was getting into! It was a big feat to attempt while working, going to school for my last semester of college (graduating), and juggling a social life (living with four rambunctious boys). But I did it. Actually, following a training plan for a race is probably the only thing that kept me exercising and in shape at that time. It gave me structure and kept me in line. I loved it! I remember I was working for a vet clinic at the time, Banfield Pet Hospital (the chain in Petsmarts), and the vet I worked for as well as another co worker were both really into running as well and motivated me to keep at it. The Vet himself had actually run the Horsetooth in previous years and offered me advice from time to time.

I finished my first half marathon on the Horsetooth Half course in 2 hours and 12 min. I didn’t stop running, not once, mostly for fear that I wouldn’t be able to start again but also so that I could prove to myself that I could run that long.

I returned to the Horsetooth last year, two years after my first, to start my Racing the States project. You can check out that story here. It’s good one, if I do say so myself. Still is my most popular/clicked on post.

I love the course they have mapped out for this race. It’s starts at the base of Hughes Stadium (the Colorado State University football field) and goes up! You’re immediately subjected to a incline of 6.4% and then after a tiny level spot, back up at 9.2%! That’s only the first two peaks and they’re in the first two miles. There are still two more hills after that! If those inclines don’t get ya, those declines certainly will! Don’t be fooled by the down hill.

Needless to say, it is a challenging course, but it’s just challenging enough. After those four hills, the second half of the course is down hill and spits you right out at New Belgium Brewery. It goes without saying that the pain is worth it. New Belgium beer is still one of my favorites: mmmm…Fat Tire…..

This year, they added a full marathon to the list (and after checking out the website, they wont be doing it again next year with the Horsetooth Series). It started farther up in the mountains, and from what I was hearing, the snow wasn’t completely melted and the race was slightly less than 26.2 miles. The marathoners met up with us after a couple miles (luckily not having to do the first 3 hills) and finished the course at the Brewery as well.

My race was fantastic! I thoroughly enjoyed every second of it…well, maybe “enjoy” isn’t the right word for the hills, but all of us runners have some sort of crazy in us and view “fun” differently than the rest of the world.

I look so sexy when I run, i know, but check out that view behind me!

I’ve already said how dear to me this event was, and this year was even better. I knew a handful of other racers. One, was a Newton Running Coach/Sponsored Runner. Nick is his name. I actually met him at a previous race. Actually, it’s a weird story. While at the Erin Go Braugh 7.77K (which I still have yet to do a post on), there was a Newton Shoe booth for people to try on and test the shoes. Post race, I just wanted to know about the shoes. I had just been introduced to the Newton line (working as a shoe sales(wo)man) and wanted to know what it was all about. I went up and talked to the Newton ambassador. Later that day, while I was updating my twitter, I noticed a picture was in my Twitter feed with the caption something like, “after party dance at the erin go braugh.” It was tweeted by a runner I had recently followed, randomly, probably referred to me in the side bar of twitter. Turns out it was the same guy I had talked to about the shoes.

At the horsetooth half, I was minding my own business when a bright yellow Newton vest crept up beside me at while running. I turned, becuase of the brightness, and noticed who it was. I called out his name and we began a nice frienly conversation about running. Actually, talking to him helped me run as well as I did this whole race. You see, we kept playing tag. Once we approached a hill, he would surpase me as I fell behind, but on the downhills and straights, I would catch up, run with him a little then push myself harder.

As we neared the end, with about 3 miles left, he crepted up behind me again. “Uh oh, I caught you again. That means it’s time for you to pick up the pace!” I did. And I finished strong, ahead of him.  (Turned out, with gun time vs chip time, he beat me by a minute or so! Darn!). 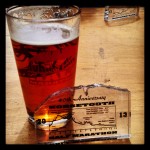 There was another friend of mine that I met through twitter (not in a creepy way, I swear). Ryan, the photographer at CO2 Photography had posted pictures of 2012’s Horsetooth Half on twitter and I stumbled upon them while searching. After staying in touch through the blog world and twitter, we finally met at a race the end of last year, the Pelican Lakes Turkey Trot. This time however, he was pushing a wheel chair up the crazy steep inclines of the Horsetooth Half. I called out my hello as he zoomed by me on the course, behind his fellow racer of the Atheltes in Tandum program.

If you have never heard of this program, you should relaly check it out and some how get involved. Basically, this program allows athletes who otherwise can’t run to particpate in big events. A lot of the runs I do benefit this great cause and support the athletes. I’ve declared that once I’m strong enough (and maybe on a flat course), I would love to help out!

There was also as handful of people I knew from contacts through my school and potential job leads. It was very nice to know others around.

Oh yeah, I forgot about MY actual race! There’s nothing too notable about my run itself. I felt pretty confident and in shape. I was generally pretty distracted by talking to people while running or looking at the scenery. I beat my course record by about 10 minutes with a time of 1:57:18 (last year’s time was 2:07:59)!!! Not my half PR, but I’m damn proud of the course record!!!

Always a blast. I met my mom at the finish line and we promptly entered the beer garden and got our New Blegium Beers. There was a live ska band to entertain the delirious runners. I met up with a friend of mine from Fort Collins and he hung out with us as well. I even managed to catch some free swag they were throwing in the crowd: a brooks drawstring bag and Saucony arm warmers!

The most important part:

I had also run this race in conjunction with a virtual 5K, Running with Angels. I had won a free entry, and in response, I promised to promote the race. If you remember, I had posted about this event in my blog and on Facebook. Maybe thats why I ran so fast, I was running with angels!

Tim’s, the one who put on the Running for Angel’s Race, Blog

Tiny Town with my Tiny buddy! He had so much fun! The Choo Choo was his favorite part! #familytime #familyadventures #explorecolorado
Now that I'm running again, I'm looking for races to run! First up, I'll be doing the virtual DC Wonder Woman race presented by Echelon @dcwonderwomanrun ! Want to join me? #WonderWomanRun #bibravepro #bibchat
First few weeks of the 2021 cross country season down!🏃‍♀️ Sunrise runs, trail miles, times trials, and our first meet. 🌄 I love this part of the season as goals are made, summer turns into fall, and everything falls into place. #coaches life #crosscountry #xc #justrunning
I'll just leave this right here for you... #rainbows #goldenco #visitgoldenco #coloradolife @visitgoldenco
Good morning from the start line of the Holy Cow Stampede. After a rough morning getting here, this sunrise makes up for it! #sunriselover #workingmom #morningmotivation
Returning to running...again. After 4+ months of not running due to some health/medical issues followed by a broken toe, I return!
Family fun at the Royal Gorge! #familytime #optoutside #vacation
From sunrise to sunset. Up before the sun and back home well after it. #racedirector #familytime #4thofjuly #fireworks
I'm not crying....you're crying! My jumper takes 6th place in the Colorado State Triple Jumper today! 🥲 with 3 PRs today! Final PR of over a foot! 35'2" #proudcoach #coacheslife #triplejump